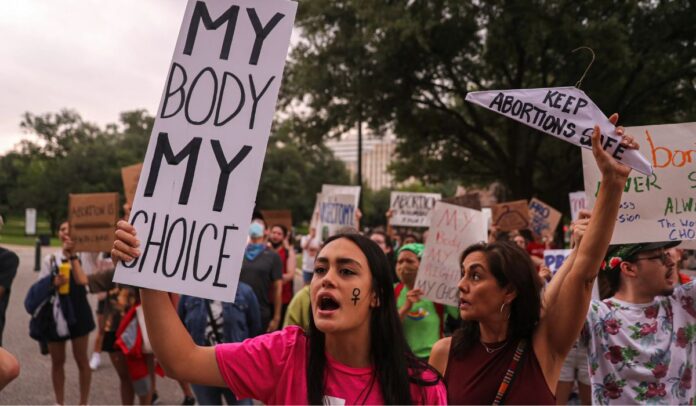 In the wake of yesterday’s anticipated but crushing Supreme Court decision striking down Roe v. Wade, Jacobin columnist Ben Burgis spoke to socialist writer and organizer Lillian Cicerchia about how to build a successful abortion rights movement in the United States. Their conversation, which appeared on Burgis’s YouTube show, Give Them an Argument.

Ben Burgis: What is the landscape after the Supreme Court decision?

It’s already like that to some extent. There are many blue states, like New York, that have a constitutionally guaranteed right to abortion. In red states, they have whittled down abortion access to the point where it’s illegal, or legal in a very circumscribed way. Abortion will become simply illegal, or inaccessible, in those states.

There are a lot of places in which people will not be able to get abortions, and people will have to travel really long distances. Many do already. If you live in South Dakota right now, there’s one abortion clinic in the state, and you have to driving for hours and hours to get these services. That’s just going to become worse.

So it’s going to be an exacerbated version of what already exists. Things have been deteriorating for so long that, for a lot of people, the post-Roe world is the status quo.

Ben Burgis: Right. So the harder question is, what can we do about it?

The other important reason is that the 1976 Hyde Amendment has restricted public funding for abortions unless states approve it. So in many red states, people cannot get abortions through federal money. This restriction has been going on since the ’70s, and it created a class-segregated reproductive health system from the beginning.

The only way to lift those restrictions is to have a universal program at the federal level. State-by-state health care schemes are not going to fix this problem.

I would also suggest — and this is a more aspirational thing — a reproductive health care bill of rights as a way of packaging abortion health into a universal health care system.

Ben Burgis: What else would be in there, in addition to abortion rights?

Lillian Cicerchia: Provisions against forced sterilization and any kind of reproductive compulsions or pressures. Patients have a bill of rights, and a reproductive health care bill of rights should be consistent with the kind of thing health care providers are already doing. But there’s a history of abuse in the United States, and people being coerced because of poverty into making decisions.

People should be provided with the full range of options. In the United States, we have this health care system where you just go in and they often give you drugs or whatever to try to solve your problem — they don’t really take the time to give you the full range of options of the kind of care you need, what your goals are, what your plans are, what your background is. I live in Germany now, and when I go to the OB-GYN, I get extremely thorough exams and pamphlets that make sure you know what you’re doing. That’s not really the way people experience health care in the United States, and it’s certainly not the way they experience reproductive health care. So changes in the qualitative nature of care need to happen in order to secure people’s rights.

The second thing is that this can’t just be an electoral strategy. There has to be a movement of health care workers and of independent feminist organizations that can pressure nonprofits and more progressive Democrats to enact legislation. It is not possible to address this problem with election campaigning alone.

Ben Burgis: What kind of movement would be able to build the broad-based support you’d need to secure abortion rights?

Lillian Cicerchia: There’s a combination of tactics, and it’s going to depend on the area. Some people see the mass women’s demonstrations for abortion rights in Latin America as one thing to look at — people have public assemblies where they get organized independently of mainstream institutions. I don’t know how successful that would be in the United States, but given the number of people that come out to demonstrate, it’s worthwhile to see if something more grassroots can put together committees that are willing to work on a health care campaign. I also think doing direct action like defending clinics is important.

People who live in blue states should reach out to people who are under siege in red states, and do so with more than just donations. It might be possible to coordinate cross-state action, both in terms of providing direct services and doing demonstrations. In a way, it’s a civil rights issue, and I’ve always wondered if it would be possible to organize, with the consent and collaboration of people in the South, freedom rides. We could attend clinics and bring resources and voice verbal support at important demonstrations or occupations at capitol buildings.

But something beyond simply getting people to vote is deeply necessary. And I think there are a number of tactics that you don’t have to pull out of your hat. People have experience with defending clinics and doing escorts, even running underground operations to get people to point A to point B, and putting pressure on the medical system. They did it once, and I think we can do it again, but it has to be on a better basis. It has to be on the basis of health care and positive rights and not just “negative” liberties like the freedom to choose to have an abortion and the privacy of the decision with your doctor.That’s really the problem with Roe: abortion was legalized on a very narrow basis, and all of the problems of class and racial segregation that happened in terms of access were entirely predictable based on the compromises that occurred as a result of that narrow basis.

So the job of the Left is to be ecumenical in tactics, but to take an offensive approach for something good — as opposed to only electing Democrats and having a defensive strategy that tries to fight off the Right in the courts. That hasn’t worked. It’s not going to work any better in the future. And Democrats are increasingly unwilling to do that anyway.

Ben Burgis: In terms of fighting for something good, and also in terms of contrast between the United States and Germany, I wonder if there’s a good way to present that unapologetic defense of reproductive rights in combination with support for state-funded day care, financial support for young parents, and an overall vision of what we think counts as a meaningful choice — you know, a broader, more socialist conception of rights.

I agree — a right to have children in a safe and healthy environment as much as the right to not have children. We want to have institutions that allow people and families, if they choose to have them, to flourish.

In Germany, the state actually won’t pay for you to get an abortion; it’s only legal up until twelve weeks, and you have to be referred to an abortion provider through a counseling service. So you can’t directly access abortion health care yourself. This is part of the compromise made with the Christian Democrats, and so there’s a lot of restrictions that created a stable equilibrium. On the one hand, there’s no right wing challenging abortion rights, but on the other hand, if you talk to German feminists, they will tell you there are a lot of problems.

The right contrast, the place with the most expansive abortion-rights policies in Europe, is the Netherlands. They also have the lowest rate of abortions per capita. Not that this matters to me morally, to be clear. I think there should be as many abortions as women who want them, but it does show that having well-rounded sexual education, an abundance of social services, and unrestricted access to an abortion does in fact decrease the likelihood that people will be coerced into undesirable choices with their sexual and reproductive freedoms.

So places like France, Germany, Italy, and Spain are not the model. There are even more egalitarian setups.

Lillian Cicerchia is a postdoctoral researcher in philosophy at the Free University of Berlin, with a focus on political economy, feminism, and critical theory.

Ben Burgis is a Jacobin columnist, an adjunct philosophy professor at Morehouse College, and the host of the YouTube show and podcast Give Them An Argument. He’s the author of several books, most recently Christopher Hitchens: What He Got Right, How He Went Wrong, and Why He Still Matters.