Colombia: a second chance on Earth 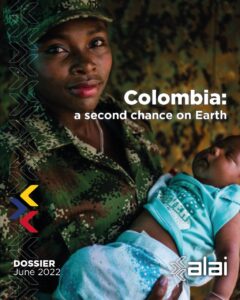 Events of different durations converge in the exciting and contradictory Colombian present, determining the future of a region that has defined itself, from the different spaces of regional integration, as a territory of peace.

In the first place, the historical carnal relations with the counterinsurgent geopolitics of the United States sustained by the local elites for a century.

Secondly, the rising cycle of popular mobilization that connects the last agrarian strikes, the indigenous mingas, the protests during the pandemic and the social outburst of April 2021 that has put the country, usually shielded by large media corporations, in the spotlight of regional public opinion and international human rights organizations.

Thirdly, the Havana Peace Accords and the end of a cycle of confrontation between the FARC-EP and the Colombian State of more than half a century of history that did not imply, however, the end of the internal armed conflict. Fourthly, the current electoral cycle and the unprecedented possibilities that a progressive coalition, the Historical Pact, and the binomial formed by Gustavo Petro and Francia Márquez, may reach the presidency and vice-presidency of the Republic.   Understanding that, paraphrasing the great Colombian novelist, nothing condemns Colombia to 100 years of Latin American solitude or 100 years of internal war, and a few days before the second round of the presidential elections that may mark a new historical course for the South American nation, ALAI presents its Dossier “Colombia: a second chance on earth”, corresponding to the month of June 2022. The same second chance expressed by the birth of Manuela, third daughter of Vanesa, a former FARC fighter who is looking for a new life in the conflictive and impoverished region of Chocó. Both illustrate the cover of this dossier, in a photograph taken by photojournalist Federico Ríos.

Journalists, researchers, intellectuals and social leaders -from the women’s and diversity movement, the trade union sector and the peasant-indigenous movement- offer here a sharp look at the country, its international connections, the root causes of its conflicts and also its possibilities, through a series of essays, opinion articles, analyses and interviews.

Some of the topics addressed in the present material, edited in Spanish, English and Portuguese, are: the electoral context, its tendencies and protagonists; the incipient construction of a new post-Uribe hegemony; the opaque but gravitating presence of drug trafficking and paramilitarism; the relations of economic subordination and the completed decade of the Free Trade Agreement between the United States and Colombia; the place of the country and its social movements in the ambivalent Latin American and Caribbean scenario; the processes of militarization, participation in NATO and counterinsurgency geopolitics; the inconclusiveness of the Peace Accord, the role of the demobilized guerrillas and the continuity of the internal armed conflict; the struggles of the feminist movement and its resistance to the patriarchal reaction embodied by new retrograde figures; the views of the peasant movement on the new national political scenario, and a long etcetera

Robert Daza: “The power of Uribism and the ultra-right is still intact”

Colombia: Where are the FARC after laying down their weapons?

Renán Vega Cantor: “We are in the third cycle of a war that never ended”

Grassroots organisations and government in Latin America: the Colombian hope

Towards a new hegemony in Colombia