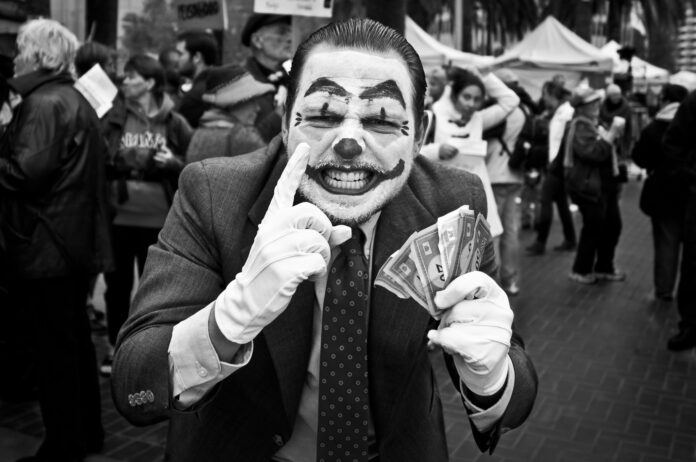 The super-rich are the enemies of humanity

Professor Walter Scheidel, in his book The Great Leveler, showed, more than convincingly, that from prehistory to the present day, all the socioeconomic systems known to humanity tended towards inequality and ended in global catastrophes. The first is quite obvious and we are seeing it today: those who have financial and economic power have inflamed political power, which produces a snowball effect. The rich and their corporations are the big donors to the political parties and then write the laws at their convenience. In 1971, a classic of political comics, The Wizard of Id summed it up best: “The golden rule is that who has the gold makes the rules.”

The current corporate capitalism is a legacy of the Slave system: in the name of freedom, the exploitation of those below, the concentration of wealth, the sacralization of the masters-entrepreneurs, and the demonization of the workers-slaves.

In 2013, the French philosopher Thomas Piketty wrote his acclaimed book Capital in the Twenty-First Century, in which he argued that, to a large extent, the growth of inequality is due to the fact that the wealth of the rich (based on stock of all assets) grew faster than the economy and the income of the rest, that is, faster than the wages of those who struggle to survive.

But inequality is not only economic; it is also racial, sexual, religious, ideological, and cultural. For generations, societies have debated the meaning of social inequality and whether this is good or bad. One of the conservative hypotheses (since they never reached the category of theories) was based on justifying inequality as a natural consequence of prosperity. In a tribe or in old times the differences were never as great as in our (proud) current societies. Hence the idea that (1) prosperity comes from inequality or (2) inequality is a necessary and inevitable consequence of prosperity prevailed. “Never before have the poor been less poor than today”, and we have to thank Capitalism and the rich for all this.

“the growth of inequality is due to the fact that the wealth of the rich (based on stock of all assets) grew faster than the economy and the income of the rest, that is, faster than the wages of those who struggle to survive”

This show of radical ignorance is the flag of libertarians and neoliberals, missionaries against the intervention of governments (of their regulations and their taxes) in the social and economic livesof the peoples. Ironically, they have the US Corporations as their ideological model, whose prosperity, like Europe’s, was built on slavery and by force of brutal imperial interventions (by governments and their secret agencies) on the rest of humanity. Nor do they see corporations as dictatorships in the way fiefdoms were in the Middle Ages and Banana republics more recently.

Only myths. Where is it shown that prosperity comes from the accumulated wealth of the rich? Why not see that development and wealth are products of humanity, based on the accumulated experience and knowledge of the millenary human history?

Another dogma of today’s world lies in a misreading of Adam Smith himself, according to whom all social progress is based on the ambition and selfishness of the individual. Therefore, the social myth according to which progress and prosperity are based on the ambition of individuals to be millionaires, which is why there is no need to “punish success” with taxes. A popular but cheap myth, if we consider that all the progress, all or almost all the technical, scientific, and social inventions recorded in history (even in the Capitalist Age) have been made by people who thought of nothing but the damn money.

Social myths do not come from the people. They come from power. Yes, the Industrial Revolution multiplied wealth and inequality a hundredfold, but you can’t separate the three elements from the brutal Euro-American imperialism. If South America had plundered the rest of the world for centuries, today it would be a model of progress and development.

The fact that today the poor are less poor than yesterday is not proof of the benefits of Capitalism, since humanity has been making progress for millennia and all at an accelerated rate. No technical or scientific progress is not due to Capitalism or the capitalists. The millionaires just kidnapped them. The current corporate capitalism is a legacy of the Slave system: in the name of freedom, the exploitation of those below, the concentration of wealth, the sacralization of the masters-entrepreneurs, and the demonization of the workers-slaves.

At this moment, Capitalism is bringing nothing but existential problems, such as (1) the destruction of the planet by dint of growth based on consumption and destruction and (2) the aggravation of social differences, which will lead to greater conflicts. Capitalism is exhausted and the crisis lies in denying the socialization of human progress, which will be inevitable (after the breakdown) with massive robotization and the development of AI.

To suggest that the problem of inequality be solved with handouts is like fighting an infection with aspirin. Instead of being cured, the infection increases. The breakdown could be avoided by a global agreement, but if sanity were not a rare commodity, we would not be drowning in an environmental crisis now. The alternative is a global collapse, a dystopian situation where all the laws accepted today as dogmas, such as the value of the dollar and of private property are broken. A collapse where there are no winners but a definitive regression to the Middle Ages.

If in a town there were kids dying of hunger and someone happened to light a cigarette with a hundred-dollar bill, it would be described as immoral. Well, that’s the situation today. That is to say that we are in the first level of three:

2. Injustice: Then, there would be the discussion of the injustice of what falls to each one and based on what reason.

3. Convenience: A less relevant discussion is about the necessity or convenience of inequity. For many of us, equity favors development and even the production of wealth. Growth as a precondition for any redistribution is a dogma created by power.

The super-rich are the enemies of humanity. Not only do they kidnap wealth from the rest, they not only monopolize politics in democracies and dictatorships, but they keep them in a state of hypnosis through (1) the great propaganda media, (2) the media of distraction, toxic fun, and (3) by virtue of keeping millions of other humans in a state of need, as wage slaves with no time to think that their brothers and neighbors are not the pirates.

But a large part of humanity loves, admires, and desires the super-rich, as the slaves loved the masters who threw a potion at them at the end of an exhausting day. The master and the potion were received as a blessing and the rebels as the demons who wanted to turn the world upside down.

All That I Ask Is That You Fight for Peace Today

Europe: caught in a trap

The Kremlin Seeks to Exploit Growing Wariness Over Refugees in Europe

It Is Dark, but I Sing Because the Morning Will Come