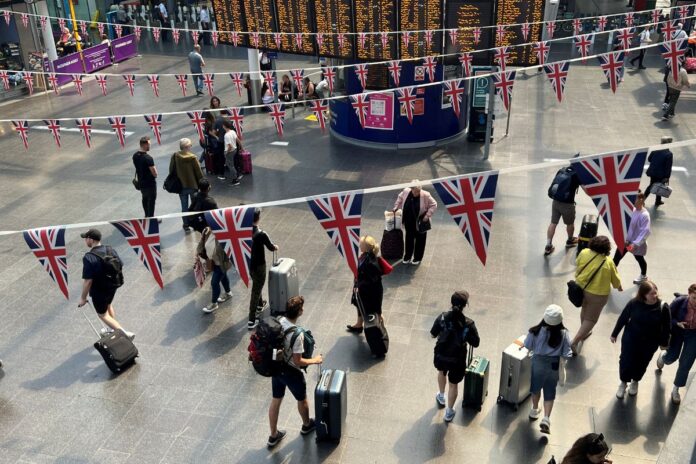 This summer has seen an impressive upsurge in industrial action by UK trade unions. In response to two years of wage freezes and the threat of dangerous job cuts, railway unions RMT (National Union of Rail, Maritime and Transport Workers) and ASLEF (Associated Society of Locomotive Engineers and Firemen) are undertaking the first national railway strike since 1989. BT Group and Royal Mail workers organised by the CWU (Communication Workers Union), too, have won mandates for national strike action. In universities, UCU (University and College Union) is conducting ongoing national action against the increasingly precarious and insecure conditions faced by their members in higher education. In schools, NEU (National Education Union) and NASUWT (Teachers’ Union) prepare to resist another round of debilitating real terms pay cuts which are pushing teachers out of the sector in droves, and piling unmanageable workloads on those that remain.

The story isn’t just one of high-profile national actions. Unite, GMB (a general workers’ union), and Unison (a public services union) are fighting for their members on hundreds of local fronts, as frequently outsourced and low-paid workers in municipal services like bus transport, refuse collection and health and social care take on their employers up and down the country. Often these employers are multinational outsourcing firms like Serco, Viola and others that specialise in ripping off workers and consumers alike through union busting, corner cutting and profiteering.

These actions have occurred despite anti-trade union laws legislating that a simple majority for industrial action isn’t enough to make a strike legal. Unions must meet a 50% turnout on postal ballots, while workplace and digital balloting are strictly prohibited.

Corporations with their hands in our pockets

The massive upsurge in trade union confidence has not appeared out of the blue. It is being driven by intersecting factors that are encouraging workers to organise to pursue our own collective economic interests. Workers are repeatedly told that the latest crisis means we must face up to being poorer, or that we have lived beyond our means, while this is not the case for the wealthy. Twelve years of Conservative government has resulted in the systematic vandalism of the public realm and the deliberate depression of living standards for all but the very rich.

The cost-of-living crisis is being driven by a rate of price inflation on basic consumer goods not seen for decades, while rampant inflation on house prices has been endemic for some time. But prices aren’t rising because workers are getting a pay rise; prices are rising because the impact of the pandemic and the war in Ukraine have pushed up the cost of energy and other basic goods, like food. Inflation is now rising by more than double the rate of pay growth; by the end of this year, workers’ real pay will be falling by a staggering 7.75%. That’s on top of the longest wage squeeze for 200 years.

On its own, this sudden rise in input costs — supply side shock — is not enough to explain the full extent of the crisis. As research from Unite the Union has shown, a second round of inflation has been triggered by firms raising prices above the minimum necessary to cover costs, profiteering from the situation at the expense of workers and consumers. Unite’s analysis is supported by research from IPPR, which shows an increase of 32% on average FTSE100 profits in 2021 and the three years before pandemic.

The Governor of the Bank of England Andrew Bailey has conjured up the spectre of a ‘wage price spiral’ to shift the blame for inflation onto the workers themselves. He has been faithfully echoed across the press by Tory ministers, pundits and commentators, yet his interpretation ignores the fact that inflation is rapidly becoming entrenched despite wages not yet actually going up. The Bank of England’s own headline forecasts for the fourth quarter of this year show CPI inflation at 13% and nominal pay growth of 5.25%, a disastrous 7.75% real pay decline.

In the face of crisis, those who have power are protecting their incomes. Businesses are making sure they don’t take a hit to their profits; city executives are seeing their bonuses soar; the wealthy have made sure that as real pay stagnates, their wealth goes on rising. The distribution of wealth in society is a function of the distribution of power in the economy, and a workers’ power is in a union.

Policymakers with their heads in the clouds

There has been a flat refusal to look reality in the face by policymakers. Nowhere has the Bank of England called for profit restraint, despite its own analysis clearly pointing to excessive price hiking as a fundamental problem. The Bank notes that firms ‘expect to increase their selling prices markedly, following the sharp rises in their costs, to protect their margins’. It goes so far to say that ‘business services firms continue to report significant cost pressure, especially higher wages, and report being able to increase prices by more than normal given strong demand’.

Pitting worker against worker, the Bank has claimed that cost-of-living wage claims by unionised workers will push up prices to the detriment of workers without trade union bargaining power. Despite fundamental disagreement on the nature of the crisis, it seems the Bank of England and the Trades Union Congress agree on at least one thing: join a trade union for better pay and conditions.

If inflation isn’t being triggered by an excess of cash in the pockets of workers, then taking money out of the economy with the biggest interest rate hike in 27 years — as the Bank did this August — achieves nothing other than to depress demand and push us closer to recession. This is not an alarmist statement: the Bank of England are predicting that the UK will spend all of 2023 in recession, with over a million job losses. That’s not inevitable — if workers get a decent pay rise, we can help protect spending and the economy.

Since wages aren’t driving inflation, all wage restraint can achieve is to take demand out of the economy and deepen the severity of the approaching recession. This puts the burden of paying for a crisis we did not cause onto the shoulders of ordinary working people — a repeat of the failed austerity policies pursued by the Conservative government since 2010.

The Bank is not freelancing on policy. The Conservative Party leadership hustings were notable for their lack of viable solutions on offer to tackle the cost-of-living crisis. The contest has instead been characterised by an obsession with divisive social issues, distracting workers from shared economic interests and diverting attention from the Conservative Party’s atrocious record on the economy during their last twelve years in government.

The economic debate we have heard so far has been utterly divorced from reality. Tory leadership candidates passionately debate how much to cut taxes on the rich at just the point when public services are crying out for funding. They demand we shrink the state at exactly the time when workers, consumers and businesses are demanding direct intervention and a coherent long-term industrial strategy.

Their answer to the longest, deepest and most severe squeeze on living standards in generations is to propose legislation in defiance of international law to allow the use of strikebreaking agency labour and to ban effective strike action outright. So much for levelling up.

Aside from their absolute commitment to the defence of existing wealth, one reason for the government’s wrongheaded approach is that, when all you have is an interest-rate-shaped hammer, everything starts to look like an inflationary nail. The government has long since abandoned the economic levers that would allow it to effectively tackle the issues head on.

Public ownership in the energy industry, backed by the TUC but not yet supported by any party, would control prices and profits and protect households and businesses from shocks to their bills. Crucially, public ownership would also allow direct democratic allocation of resources essential to meet our net zero targets.

Even where the state has been forced into direct intervention, as in the railway sector, it has refused to use its powers effectively. Private train companies were bailed out to the tune of £16 billion over the course of the pandemic, an eye-watering proportion of which passed directly into shareholder profits. Meanwhile, publicly owned Transport for London has been faced with gigantic budget cuts and enforced reduction to its service capacity and investment plans. Transport secretary Grant Shapps’ has refused to come to the negotiating table with the RMT during the ongoing national dispute, despite open admissions from the railway employers that only the Department for Transport has the power to allocate the finance necessary to settle the dispute.

While companies take measures to protect their bottom line, the government has shown itself unwilling to shield voters from the cost-of-living crisis. It has calculated that a deep recession and a sharp rise in unemployment is an acceptable price to pay in order to avoid raising wages, strengthening public services, and enacting a comprehensive industrial strategy to achieve net zero by 2050.

Discouragingly, the government appears determined to do everything it can to obstruct workers speaking up and taking power. This now includes promises to put legitimate trade union activity outside of the law. Attacks on workers have arrived in the context of draconian legislation undermining other pillars of democratic life, including the Policing, Crime, Sentencing, and Courts Act aimed at quelling public protest, and the Nationality and Borders Act, which deepens the criminalisation of migrant workers and refugees.

As workers understand that neither this government nor private employers will offer solutions out of good will, we must improve our bargaining power directly in the workplace. Not only are we all demanding cost-of-living pay increases, ordinary people are turning to trade unions for basic dignity and respect.