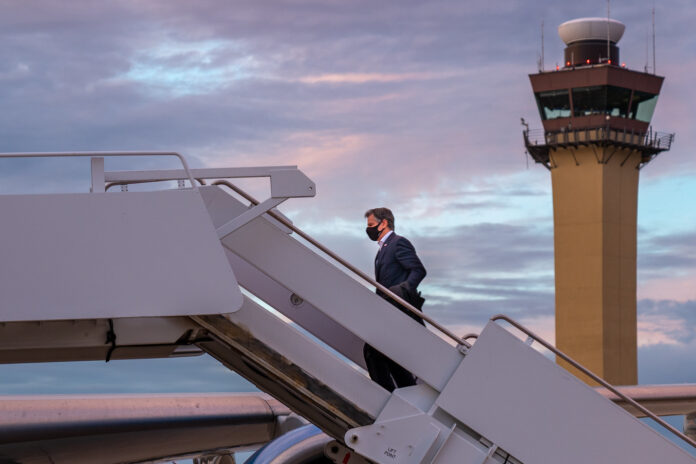 On April 19, dozens of Panamanians took to the streets of the capital Panama City to protest the arrival of the US Secretaries of State and Homeland Security, Antony Blinken and Alejandro Mayorkas. The US officials came to the Central American country to attend the Ministerial Conference on Migration and Protection, a regional meeting on migration that began on April 19 and concluded on April 20.

Members of progressive Broad Front for Democracy (FAD) party, social organization National Front for the Defense of Economic and Social Rights (FRENADESO) and trade union Single Union of Construction Workers (SUNTRACS), among others, demonstrated in front of the Monument to the Martyrs. The protesters recalled the 1989 US invasion of Panama, which resulted in the killing of thousands of citizens, and rejected the US meddling in internal affairs. They declared Blinken a “persona non grata” and burned his effigy, along with that of the US President Joe Biden. They also shouted slogans such as “Get out Blinken,” “Get out Yankee assassins,” among others.

“We respect Panamanian people. We respect the memory of the martyrs of January 9. We respect the victims of the invasion. Therefore, we do not accept that a country that has done so much damage to humanity, comes to give us orders,” said the SUNTRACS.

The protesters took the opportunity to condemn the illegal detention and extradition of Venezuelan diplomat Alex Saab by the US government and demanded his release, pointing out “feeding people is not a crime.” Saab was arrested in Cape Verde on June 12, 2020 at the request of the US government when his plane was refueling at the Amilcar Cabral International Airport on the island of Sal. He was traveling to Iran to negotiate trade deals for food and medicine for Venezuelan public programs, including the CLAP (Local Committees of Supply and Production). On October 16, 2021, he was extradited to the United States.

The demonstrators also rejected the mistreatment of Latin American immigrants by the US government and condemned that the US imperialism was responsible for migration in the region. The representatives from the FAD stressed that for decades, the US governments have been forcing the regional governments to impose neoliberal policies, which deepen inequality and poverty, the structural causes of migration.

Since March 2020, the US government has been using the COVID-19 pandemic as a pretext to kick out people seeking humanitarian asylum in the country. According to the US Customs and Border Protection (CBP), just in March 2022, the US officials prevented over 220,000 Latin American undocumented migrants from crossing the US border with Mexico. About half of them were immediately expelled under the Title 42 order, which considers the arrival of migrants a “threat” to health security.

During their two-day visit, Blinken and Mayorkas met with their counterparts from more than 20 Latin American and Caribbean countries and discussed cooperation on migration in the hemisphere. The representatives of all countries agreed that political instability, absence of strong institutions, corruption, insecurity, and lack of opportunities -worsened by the COVID-19 pandemic- were some of the causes of the large-scale regional migration.

In this regard, Blinken said that the United States considers Panama, a territory that serves as transit each year for thousands of migrants heading to North America, a key ally to face part of the migratory crisis. Meanwhile, Panamanian foreign minister Erika Mouynes called on the governments of the region to respond as a strengthened group, with a single agenda and the same interest.